Please feel free to read or join the discussion! 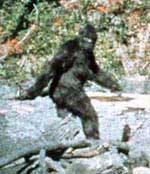 FACT Sasquatch is a protected specie in Washington State


"A California woman is suing the state after it told her that the hairy, scary creature she saw in the woods was a bear -- not a Bigfoot. Claudia Ackley, 46, was hiking with her two daughters when, she says, they spotted a Sasquatch staring menacingly at them though a small split tree. She called California's Department of Fish and Wildlife and was told she had probably seen a bear. Furious, she filed a lawsuit demanding that the state recognize Sasquatch as a distinct species an essential first step, she says, to protect the public from potentially dangerous Bigfoots. 'If I can save one life,' Ackley says, 'it will be worth it.'"

« back
Return to Website  > Index  > CRYPTOZOOLOGY  > BIGFOOT CASE BOOK  > It must be true.. I read it in the ta...
Free Forum&nbsppowered by Bravenet