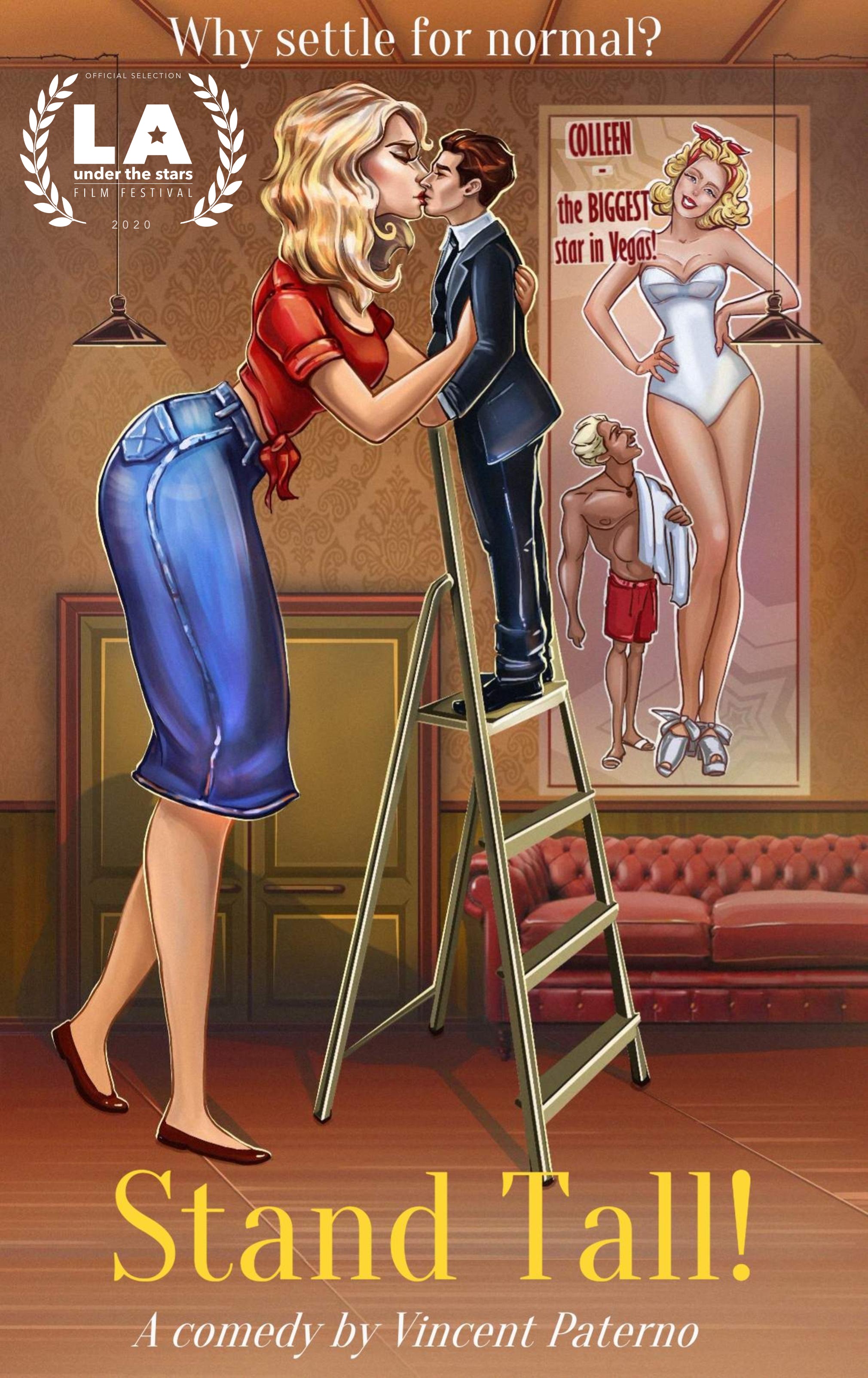 LOGLINE: A Vegas waitress tripled in size falls for the scientist who accidentally enlarged her, becomes a showroom headliner and rescues him when he's kidnapped by three mutual adversaries.

SYNOPSIS: Colleen Cossitt, a singing-dancing waitress at the Bryson casino, takes pal Meg Switlik to her job at the Purple Pavilion gentlemen's club, where smarmy owner Vito Cortez announces his group has bought a nearby casino, which will take a Vegas nostalgia theme with a showgirl revue run by ex-dancer Cassandra Maitland. Colleen's interested, but Cassandra notes she's but 5-foot-4 3/8.

Older sister Maureen Cossitt has met Colleen's 6-foot-7 high school flame Bill Messmer, now an engineering executive. Colleen dotes on nephew Ivan Black, 10, after physical abuse by dissolute ex-husband Tim Whitman left her unable to have children. At the Bryson, she vents about being short to scientist Keswick Fletcher, a longtime customer who owes Vito $154,000 for a gambling debt and is secretly wooing Cassandra. He tells Colleen his new device, the Resizer, can enlarge bodies proportionally. She visits Keswick’s lab, a converted trucking warehouse, and decides to enlarge herself to 6-foot-2 (15 percent growth) the following day so she can become a showgirl and possibly woo Bill as well.

As the procedure begins, an enlarged cat escapes her cage, and Keswick accidentally slides the growth rate to its maximum triple scale. Colleen’s body and clothes grow three times larger, to 16-foot-1 1/8. As the Resizer can only enlarge objects, not reduce them, she’s stuck, and Keswick fears her it could be fatal. Meg, Maureen and Ivan come to the lab to stick by Colleen (Ivan loves that she's now "fee-fi-fo-fum" size), whereas Bill wants nothing to do with her. She's devastated, but Keswick and aide Belinda Austin say they'll shelter her and monitor her health.

Keswick and Belinda can't restore her; as time goes by, it's apparent her gigantism won't kill her. When he and Colleen are alone one evening, they find they’re in love. Calling him “my little Keswick,” each promises to protect the other. Cassandra frequents the Purple Pavilion, drawing closer to Tim and Vito; the latter sees a smartphone photo of a giant Colleen from his girlfriend Meg, who labels it a special effect.

Eccentric casino owner Ernest Sanderson (who Vito is blackmailing) wants to fire Colleen for her leave of absence. Finding her in the lab, she gently persuades him to keep her on the payroll. He signs her to a $1 million deal to headline at his showroom, with Keswick named her manager to assure she isn’t exploited. Visiting the lab, Cassandra sees Keswick's in love with a giant and tells Tim and Vito about it. Unveiled to the public with a clumsy, aborted debut, Colleen soon becomes a hit attraction beloved by young and old, repelling Cassandra's romantic challenge and rejecting Tim's pleas for money. Tim moves in with Cassandra and align with Vito.

Colleen fires Keswick upon learning he owes a six-figure gambling sum. After refusing Vito’s offer to use her show as collateral, not letting on he’s no longer her manager, Keswick is kidnapped by Vito’s henchmen. He's absent for several days, and a now-lonely Colleen regrets letting him go. Vito -- whose new revue is struggling -- offers to free Keswick if he'll build his syndicate a Resizer, which Cassandra says she'll use to make herself and her showgirls giants. Meg finds Keswick at Vito’s hideaway, learns of her boss's mob ties and tells Colleen where he’s held. She vows to rescue him.

Belinda altered the Resizer to reduce as well as enlarge, and Colleen is inadvertently shrunk back to 5-foot-4 3/8, though she prevents her friends from being reduced. Colleen, Belinda, Maureen and Meg enter the hideaway and save Keswick. Vito’s gang, including Tim and Cassandra, pursue them, but when they reach the lab, Colleen entangles them in giant lingerie, dropped from a second-story window. Vito, Tim and Cassandra escape and enter the lab. Cassandra aims a gun at Keswick, ordering him to make the three giants, unaware the machine now only reduces, not enlarges. Keswick feigns coercion and complies, and the trio are shrunk to one-third scale. Vito agrees to waive Keswick’s debts and Colleen orders Tim not to abuse Cassandra, as he once abused her.

Colleen decides to retire, accepting Keswick’s marriage proposal the night of her farewell show. She sings a love song to him, as the shrinking effect wears off and she bursts out of her gown back to triple size. (Vito, Tim and Cassandra also grow back but are trapped inside a crib and playpen at the lab.) She tells Keswick if he doesn’t want to marry her, she’ll understand, but he says he’ll keep his promise. “There’s no other man I’d rather lose my giant virginity to,” she tells him, then announces her return to performing and their engagement to a jubilant crowd, as Keswick gets a movie offer for his new fiancee.